From Brooklyn to San Francisco

Toto’s Restaurant & Pizzeria was first opened by my grandparents, Caroline and Antonio (Toto) Spadarella in 1932 on Coney Island Avenue in Brooklyn. Both were from Naples, the region in Italy where pizza originated. Using a huge brick oven, they began baking pizza according to the traditional recipe, the same recipe we use today. 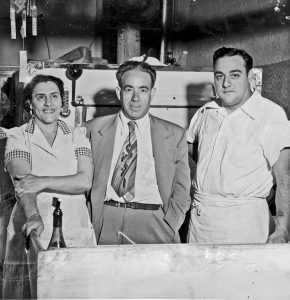 After World War II, the family moved to San Francisco, where Toto and Caroline opened an Italian restaurant in North Beach. As the love of pizza grew, the business thrived and in 1949 a second San Francisco restaurant opened.

My parents Ida and Frank opened a larger Toto’s on Mission street in 1954 and so began San Francisco’s first pizza delivery service, using a fleet of brightly painted motorcycles and vans. In 1957, Toto’s Daly City opened followed by the San Bruno restaurant in 1972, Belmont in 1999, and San Mateo in 2007. In 2021, both Toto’s San Francisco and Toto’s San Jose locations opened for delivery service only.

Today, the 5th generation of the Spadarella family own and operate the San Bruno, Belmont, San Francisco and San Jose locations. As more and more people come to discover and appreciate traditional Italian cooking, they are also discovering the Italian pizza our grandfather Toto taught us to make.

Takeout, delivery or catered, our quality and service is as traditional as our pizza!

Takeout, delivery or catered, our quality and service is as traditional as our pizza!